Majdanek: where I lost my faith, and found it again

The original Hebrew version can be found here.

We got up in the morning, early as usual, got ready, and left. Today we're going to Majdanek.

We got there too quickly. So, this is the place they say it's the hardest to come to. Where everything is left. Where there's the mountain of ashes.

We started out at the memorial. We went down its steps, between huge rocks. It felt like a valley of the shadow of death. We stood under that monument made of an enormous rock, and looked at the camp. I kept thinking if I could go into the crematorium. Looking back at it all, I found out it's much harder to be in the gas chamber. That's where lives were ripped, in the crematorium they just got rid of what was left.

We started walking towards the entrance of the camp. On the way we saw the white-painted house of the camp commander. We marched on a path made of small stones, which the prisoners made.

We entered the camp. We turned towards the "bad und disinfektion" wooden building. I'm not sure why, but I had no idea about where I was going. As if I had a temporary black-out when it came to the "bath" and "disinfection" they had here. As if I haven't heard that a million times. As if I don't know.

I went in just like them, sixty years ago.

And everything became so real. The terrible screeching of the old wooden floor in the undressing room made me shiver.

Then we went on, into the showers. The rusty taps looked just like the screeching sounds of the floor. The sight was awful. It was hard to breath. The walls were closing in on us. There was no way out.

I had no idea where we were headed now. I really didn't. Just like them, sixty years ago. Only when I saw someone say that she doesn't want to go on, I realized we're going to someplace bad. But I did not know where.

And then we entered. 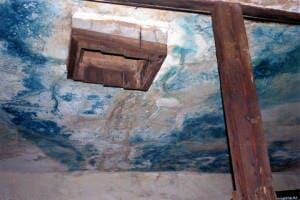 And I saw the blue breaths that stuck to the wall, and the wooden square in the ceiling, and I knew.

And I felt their souls touch me. And I cried for them from the depths of my soul, from the deepest insides that I've never felt before. And my soul came out to them and cried a great and bitter cry. And I looked at the breaths on the walls. And I thought of this cursed floor. And I told them I know. And I'm here. And I also didn't know where I was going, thinking we're only here for bath and disinfection. And it hurt me to breath here. And I told them I'm sorry if it's hard for them to see me like this, breathing where they were suffocated. And my soul merged with the sounds of the shofar and went up-up and cried in the heavens. Because I'm in so much pain for them. And I don't know where to lead all my agony. And I'd rather have someone come and just shatter me all up and it would hurt less than feeling all this. And they sang "Ani Ma'amin". "I believe". And I didn't sing. I didn't move. I stood still, frozen. And I didn't think. And I didn't exist. 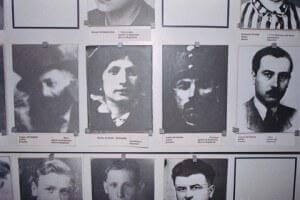 We kept walking. We got into another wooden building that was turned into a museum, with items like prisoners' cloths, children's dolls, and many enlarged prisoners' passport photos on the walls, with captions. I started looking at the photos and names. Photo after photo, name after name. Suddenly I saw, in capital letters: ANTMANN. Antmann? What Antmann? Which Antmann had been here? My dad said no one of the Antmann family was murdered in the Holocaust? Then I see the name of the city he came from – Nitra, the city of my Antmann family. I say nothing. Just stand and stare. Then I see his profession –a jeweler. The Antmanns father was a jeweler. Then I burst into terrified tears. I'm confused. And then I see on the photo next to him there's another Antmann. And another one. Six of them. I don't understand. I don't know who they are, but I know they're family. I'm crying, gasping for air. As if the air can fill in the gaps of information. I feel helpless. I'm shocked. Don't know what to say. I never had family who was murdered in a concentration camp! Majdanek was a scary, detached name, but now it's home. What are the odds that out of hundreds of thousands who were murdered here the pictures that survived and reached the wall of this museum will be of family I never knew I had?

I'm not here. Hovering between questions. Letting go of reality. At the room with all the shoes I wonder – where are your shoes?

I enter the crematorium. After what happened today nothing really matters to me. I am not here.

"I believe with perfect faith in the coming of the messiah, and even though he may tarry, nonetheless, I will wait, every day, for him to come".